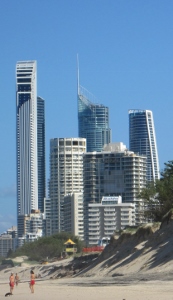 MEL Consultants has in-house stereolithography and conventional machine shop facilities to construct even the most complex architectural designs. These physical models then have pressure taps installed on the external surfaces prior to placing in the boundary-layer wind tunnel. The wind tunnel is equipped with the latest multichannel, simultaneous-pressure, data-collection system that allows time-series pressure data to be stored from up to 1000 transducers connected to the building model. The computer controlled turntable can be programed to cover 360 degrees of wind azimuth for any arbitrary wind direction increment. Typically 5 degree increments (or 72 wind azimuths) are used to ensure that even the narrow band pressure events are captured, as these can have significant influence on the facade design. Many other laboratories only use an azimith increment of 10 degrees (36 directions). The MEL Consultants' data-reduction system outputs the pressure data in a form that can be viewed in Microsoft Excel (useful for directional analysis to aid in the design of mechanical air handling systems), and also produces coloured contour plots. These coloured plots allow designers and engineers to quickly identify areas of extreme peak pressures that may require additional strengthening or, conversely, low peak pressure areas that may provide potential savings in facade design.

As these pressure time series data are collected simultaneously over the building surfaces the sophisticated data-reduction skills available may result in more targeted design information. For example, the difference in peak pressures across an element such as a porte cochere, canopy, cooling tower, or parapet can yield the correlated net pressure across these potentially wind-sensitive features. In a similar manner many surface taps along the line of a roof beam or portal frame can yield a time series of the centre moment, column shear, or some other action of interest to the structural engineer. By using the structural engineers influence coefficient analysis a large variety of actions can be explored. The inclusion of the structural engineers' dynamic analysis can be used to understand the impact of a resonance, and create quasi-static design loads that include the influence of any resonant amplification of the action on a roof or other element.

More in this category: Pedestrian Comfort Environmental Wind Studies »
back to top